We are very densely populated with access points to accommodate at least 50-60 devices per classroom at any given time.  Because of this AP density it is necessary to make adjustments to the network on occasion.

As indicated in part two, pcaps determined that we were decoding beacon frames with valid FCS into the high -80s dBm, all with the same BSSID (Virtual Cell).  Even though there were several different devices consuming wifi in the area, Chromebooks were hyper sensitive to the fluctuating SNR and were the only device type continuously performing four way handshakes due to a triggered roam (SNR <=18).

Since we are so densely populated with access points (to meet requirements), the only way to tune away the issue was to increase the minimum base transmit rate even further (from 24 Mbps).

This time I was receiving most beacons with valid FCS in the mid -70s dBm.  Further testing with the Chromebooks showed the results I wanted to see.

Unnecessary (triggered) roams were dramatically reduced and performance was much better.  Beacon overhead was decreased by 50% which is indicative of moving from 24 to 48 Mbps minimum base rate. 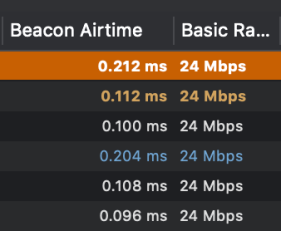 We ended up testing this configuration change at a couple of our high schools of similar layout, design, and requirements with very good results.